In the information society, people receive a large amount of information each day. As the main interface facilitating exchange between people and information, display products have a significant impact on people’s lives. Given the rapid increase of information—in particular the replacement of traditional single text video information by the multimedia digital audio —higher demand of display quality and resolutuion is proposed for the display device. Therefore, various new display technologies are booming, especially the new generation of display technology, Micro LED, which has become a technical highland for display manufacturers. In response to this shift, Absen released the Micro LED display technology worldwide on 12 March 2021.

Different scenarios propose  different performance requirements for display device s, and the corresponding mainstream display technologies selected are also different . According to usage scenarios, display devices can be divided into 2C display and 2B display.

2C display mainly refers to TVs, monitors, laptops, in-vehicle products, mobile phones, wearable products etc. LCD is the traditional technical solution mainly applied to 2C display, while it suffers from issues such as low contrast, small color gamut and limited viewing angle. With the development of material technologies, OLED technology has emerged. Compared with LCD, OLED boasts significant advantages including simpler frames, thinner overall thickness, higher brightness and contrast, larger viewing angle, wider color gamut range and lower power consumption. These strengths have quickly enabled OLED display products to dominate the consumer market. However, OLED display products also have disadvantages such as short life. Micro LED is characterized by display technology that minimizes the LED display to a micron scale, which matches the long life and reliability of inorganic LED. This technology results in displays that feature high brightness, high contrast, wide color gamut, long service life and high reliability. Due to these qualities, the micro LED display is considered to be a near perfect display technology. The high brightness and energy-saving capabilities favor broad application prospects of micro LED in 0.x-inch and x-inch wearable products, while  Apple, as a representative, expects to apply Micro LED technology to 2C products such as the Apple Watch. On the other hand, the advantage of seamless splicing renders the Micro LED the best solution for large screen TV products above 85-inch. Currently, Sony, Samsung and some domestic display manufacturers have launched large screen consumer products based on Micro LED technology.

2B display   mainly refer s to outdoor   and indoor large screens in the theaters, shopping malls, meeting rooms, control rooms, etc. The mainstream display technologies selected for these use scenarios include LCD splicing display, projection display and LED large screen display. The imposssibility of seamless splicing  for LCD and the poor brightness  and  contrast for projection display   limit  their  application , while  LED display characterized by high brightness, high contrast, wide color gamut, available seamless splicing and other advantages  becomes the most promising display technology .   With the decrease of dot pitch, especially the development of Micro LED technology, the ultra-high definition of LED display has become a trend,  and  the display quality is getting more and more delicate . Consequently , the application scenarios  for LED display are also expanding from the traditional engineering d isplay   to the commercial display and i n- h ome d isplay . It can be seen that Micro LED is highly competitive in both 2C and 2B markets because of its unique advantages . Accordingly, both t raditional panel manufacturers and LED display manufacturers are actively d evelop ing this technology. As a global leading supplier for true LED display applications and services ,  Absen is no exception.   At present, Absen has launched the following Micro LED commercial display products worldwide: 2K 55-inch (P0.6), 2K 73-inch (P0.8), 2K 82-inch (P0.9), 4K 110-inch (P0.6), 4K 138-inch (P0.7), 4K 165-inch (P0.9) and 8K 220-inch (P0.6). 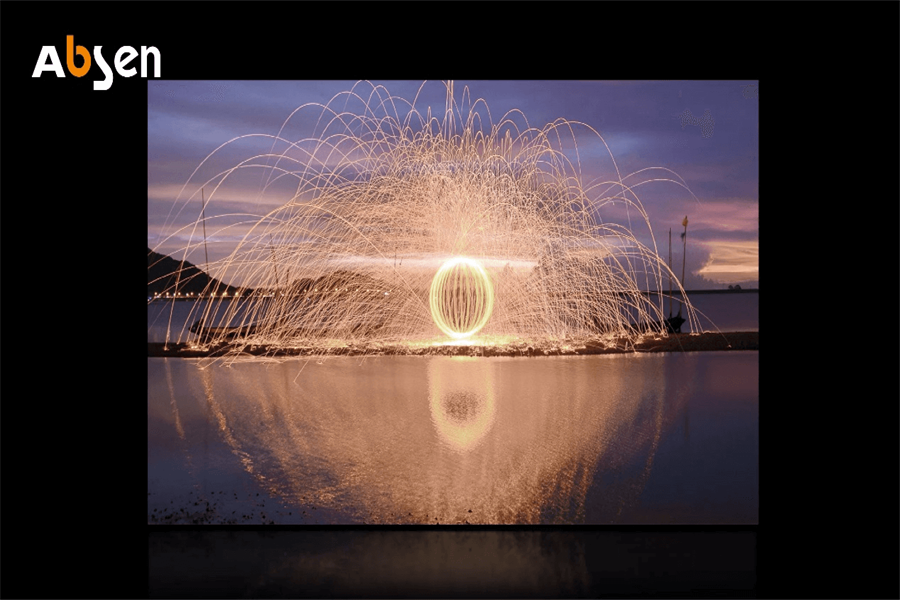 Micro LED display technology can be deemed as the micro pitch and HD of traditional LED displays , and t iny LED particles  are used as the pixel light-emitting points . Accordingly, the  structure and encapsulation  of  LED chip   directly affect the performance of Micro LED display devices.

Generally, the LED chip is composed of the substrate, P-type semiconductor layer, N-type semiconductor layer, P-N junction ,  positive electrode   and negative electrode. When the positive voltage is applied between the positive electrode and negative electrode, the  holes injected from the P area to the N area and the electrons injected from the N area to the P area recombine at the PN junction, converting the electrical energy into light with different wavelength . The structure of LED chips is mainly divided into the following types : wire-bonding structure , flip structure   and   vertical structure . Figure 1 shows the schematic design of three chip structures.

As the earliest chip structure , the wire-bonding chip is composed of the following from top to bottom: electrodes, P-type semiconductor layer, light emitting layer, N-type semiconductor layer and substrates.In this structure, t he heat generated at the PN junction in this structure needs to pass through the sapphire substrate to be conducted to the heat sink . T he poor thermal conductivity of the sapphire leads to poor thermal conductivity of the structure, thereby reducing the luminous efficiency and reliability of the chip .  In the structure of the wire-bonding chip, the p-electrode and n-electrode are both located on the light-emitting surface of the chip, and the shielding of the electrodes will resul t  in low luminous efficiency of the chip . Furthermore, locating the p-electrode and n-electrode on the same side  of the chip is also prone to current crowding, which will reduce the luminous efficiency. Additionally, electrode metal drift may be caused by factors such as temperature, humidity and etc , which will result in  short-circuit problems  as  the reduction of the chip size  and the distance  between positive and negative electrode s.

The  flip chip  is composed of the following from top to bottom: sapphire substrate, N-type semiconductor layer, light emitting layer, P-type semiconductor layer and electrodes. Compared with the wire-bonding chip, the heat generated at the P-N junction of this structure can be directly  conducted to the heat sink without passing through the substrate , resulting in excellent heat dissipation performance  and thus excellent luminous efficiency and reliability. I n the flip structure, both p electrode and n electrode are located on the bottom, which avoids the obstruction of light emitted from the top and contribute s  to  a  high light output efficiency . Additionally , the long distance between positive and negative electrode s in the flip structure   can reduce the risk of short circuit caused by metal migration of the electrodes.

Different from the the wire-bonding chip,   the substrate with high thermal conductivity (Si, Ge or Cu substrate) instead of sapphire substrate  is used in the vertical chip , which greatly improves the heat dissipation performance of the chip. Moreover , the positive electrode and negative electrode of the vertical chip are located on the top and bottom of the chip separately , which contributes to more uniform distribution of the current and heat and further improve d reliability of the chip. At the present however, the current vertical chip suffers from  high cost and low mass production capacity .

Table 1 outlines the performance comparison of these three chips. It can be seen that the flip chip is more suitable for  micro LED display products due to the high luminous efficiency, good heat dissipation performance , high reliability and mass production capacity.

3 Comparison of  the e ncapsulation forms of Micro LED 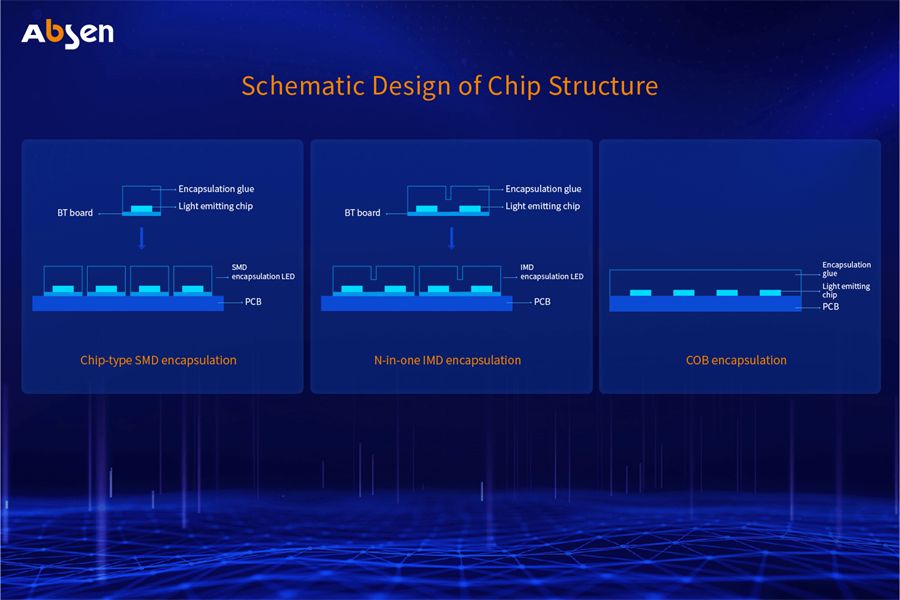 The characteristics of the abovementioned encapsulation methods are shown in Table 2. COB encapsulation  with the highest degree of integration can be used to achieve the smallest pixel pitch, the highest reliability and the longest display life theoretically and is thought to be the best packaging solution for Micro LED.

Micro LED is considered to be a nearly perfect display technology and has broad application prospects in the field of large-screen displays above 85 inches because of its advantages of high brightness, high contrast, wide color gamut, and seamless splicing. Major display manufacturers are actively deploying in the Micro LED display field.   T he  structure and encapsulation  of  LED chip   directly determine  the performance of Micro LED display devices.  At present, three kinds of structure, namely the wire-bonding structure, flip structure and vertical structure, are mainly adopted in the industry. It can be seen from the comparison of those structures that the flip chip with  high light emitting efficiency, good heat dissipation performance, high reliability and high mass production capacity is more suitable for  Micro LED displays. Typically, Micro LED encapsulation   forms include Chip-type SMD encapsulation, N-in-one IMD encapsulation and COB encapsulation. Among these three kinds of encapsulation, COB encapsulation with the highest integration   can be used to achieve the smallest pixel pitch, the highest reliability and the longest display life theoretically and is thought to be the best packaging solution for Micro LED.

The full range of Micro LED products released by Absen are based on Absen proprietary HCCI technology.

A professional team has been continuously researching on the optical design  and image quality processing  to improve the display effect.   These efforts have  contributed to smooth images, high color reproduction, gentle   and consistent display. All the results have been applied to products which are widely used in scenarios such as large control centers and conference centers. 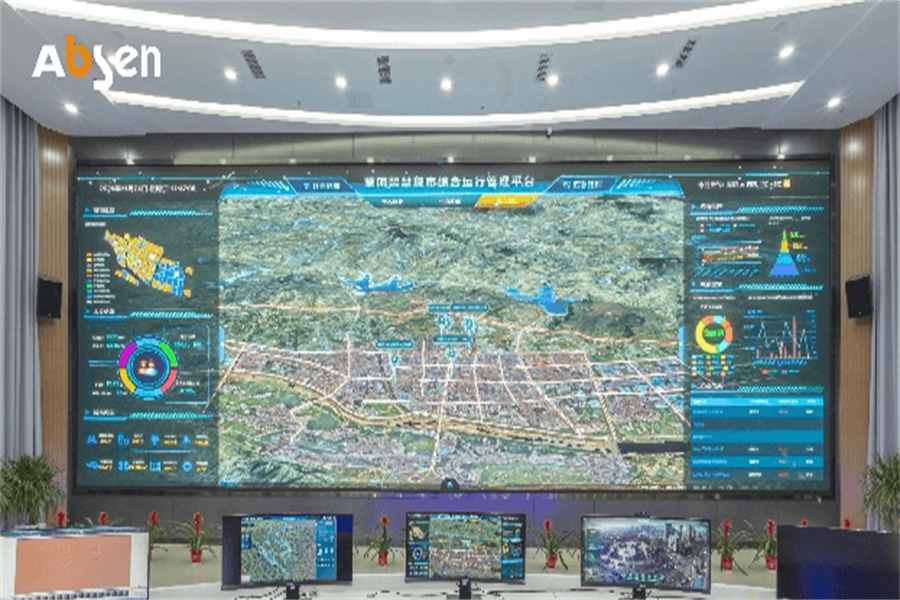